WHEN Christ Jesus said, "Not every one that saith unto me, Lord, Lord, shall enter into the kingdom of heaven; but he that doeth the will of my Father which is in heaven," he drew a definite line of demarcation between merely thinking about spiritual things and truly reflecting the divine Mind. It is safe to say that a vast number of people have passed through this earthly experience who daily, to a greater or lesser extent, thought about God and spiritual things,—as they believed them to be,—but who never rose to the mental height of reflecting to any great extent the divine Mind; for had they done so, they would have repeated in some degree the works of Christ Jesus.

It is comforting and encouraging to note that the Master did not say that none of those who said unto him, "Lord, Lord," would enter into the kingdom of heaven but, "Not every one." Indeed, many who may begin by merely thinking about spiritual things are led by their desire to know God aright to that demonstrable understanding of Him which Christian Science imparts. But unless the mere thinking about God develops into that condition of thought which is definitely God-governed, and which therefore recognizes the infinitude of the divine Mind and its reflection, and the unreality of all that is unlike this Mind's immaculate nature, it remains largely inoperative and ineffective so far as the redemption of mankind is concerned. 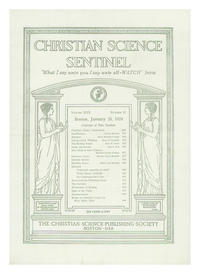