In the gospel story of Jesus' arrival in the little town of Bethsaida, which lies on the shores of the Sea of Galilee, we find a beautiful case of healing. The whole incident is told in five verses, and Mark alone records it. This loving cure of our blessed Master was not instantaneously performed, as were most of his mighty works. We read, "They bring a blind man unto him, and besought him to touch him;" and we learn in the following verse that Jesus did not immediately comply with their request, but instead, "he took the blind man by the hand, and led him out of the town."

How well one can picture that walk with Jesus as he realized the truth about man! Mrs. Eddy has written in the textbook, "Science and Health with Key to the Scriptures" (pp. 476, 477): "Jesus beheld in Science the perfect man, who appeared to him where sinning mortal man appears to mortals. In this perfect man the Saviour saw God's own likeness, and this correct view of man healed the sick." And what of the blind man's attitude? Surely it must have been one of willing, trustful obedience, of childlike expectancy, and of gladness to lay down any sense of resistance. Thus we may follow in thought the walk out of the town, right on to the place where the first act of the Master was to show his contempt for matter or the false belief which would argue that sight is material; for he spat on the blind eyes. After that he laid his hands on them; and if we study another passage in the textbook referred to above, we shall find on page 38, in explanation of the Biblical statement that "the right hand of the Lord is exalted," that hand "expresses spiritual power." 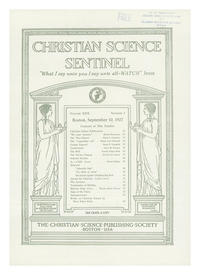