On page 16 of "No and Yes" Mrs. Eddy writes, "For God to know, is to be; that is, what He knows must truly and eternally exist." Thus she briefly points out where we must look for reality: in the divine Mind alone is to be found that which eternally is. The questions then arise: How shall we know? How shall we determine whether ours be the true concept or the false; whether it be after the pattern shown on the mount, or simply according to mortal illusion? Truly narrow and beset with trials is the way that the Christian Scientist must tread on his upward journey! In the valley of decision his sincerity is often put to severe tests, while he learns the lesson that only by fidelity to divine Principle can he win understanding. But the earnest student is not appalled. He knows that God knows, and that because of God's knowing men can know. When the Christian Scientist begins to falter, there comes to his thought the inspired and inspiring example of Christ Jesus, supplying courage with which to press on. He recalls that unmurmuringly, though with bleeding feet, the Master trod the path in order to open it to mankind; and in the fullness of gratitude no place is left for the occupancy of deterring suggestion.

Discouragement has been called Satan's best tool. There is no better antidote for it than to read and ponder Jesus' life as related in the Gospels. Whatever our trials, they pale into insignificance when compared with what he endured in carrying out the divine purpose for which he was sent. It is true that God sustained him; but Jesus had to demonstrate God's presence and power, as we all must do. Because he refused to dwell anywhere but in the consciousness of reality—in the divine Mind—he was able to do this. Seeing with true vision, he was enabled to bring to fruition his momentous task. In perfect accord with Jesus' life, Christian Science reveals man as he is, the radiant reflection of infinite good, instead of as a limited, sinful mortal. It explains man as God's image, as opposed to the material, sense-driven counterfeit: the one, eternal and ever harmonious; the other, "of few days, and full of trouble." 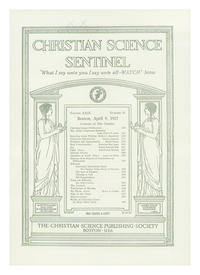