While enjoying an outing in a canoe, gliding over the quiet waters of a certain river, a student of Christian Science learned from an Indian a lesson of great significance. Under the Indian guide's expert paddling, the canoe maintained rapid and steady progress upstream. Suddenly, as the canoe rounded a bend in the river, a field of floating logs was sighted, which seemed to fill the entire stream. In reply to a question as to whether or not the logs would prevent further progress upstream, the Indian remarked in a casual manner, which indicated no anticipation of trouble, "They do bother some, going up." He, however, kept on with his paddling, apparently quite unconcerned about the logs; and the canoe lost no headway.

Upon meeting the first log, at the edge of the floating field, with a deft stroke of the paddle the Indian caused the bow of the canoe to touch the log gently and sweep it aside, thus clearing a passageway. Each log encountered received the same treatment, and responded immediately to the touch of the frail little craft. An adequate channel through the field of logs was thus opened, and in the meantime there appeared to be little or no slackening of speed. 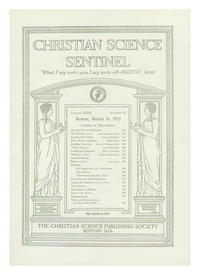