On page 17 of the Manual of The Mother Church, Mrs. Eddy has written, "In the spring of 1879, a little band of earnest seekers after Truth went into deliberations over forming a church without creeds, to be called the 'Church of Christ, Scientist.'" Later, on the same page, she adds, "It was voted,—To organize a church designed to commemorate the word and works of our Master."

Our Leader had, through her obedience and spiritual vision, discovered the Science of Life, the truth about God and man, the truth that would free mankind from the shackles of sin, disease, poverty, and death. To make her great discovery practical and operative, it must be given to the world, and walls of protection built about it. It was her task (the greatest that had ever befallen woman) to spread this Science of Being over the civilized globe, so that all might be made free by availing themselves of the knowledge of it. At first it was difficult to get men to pause and listen; but beholding her marvelous demonstrations of spiritual healing, some few stopped to hear the message and learn of her how to demonstrate the power of God as she did, for the salvation of mankind. 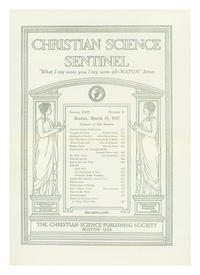