Through the understanding of God, as revealed in Christian Science,...

Through the understanding of God, as revealed in Christian Science, I have been saved and delivered from the bondage of severe sickness; and it affords me great pleasure to offer this testimony of my healing to the readers of this periodical, that it may encourage them.

For a long time I had not been feeling well; and I had been under the doctor's care for various ailments more or less all my life. In fact, I never knew of any other healing method until I heard of Christian Science through my sister, who is a Christian Scientist. One day in February, 1923, on account of acute suffering, I went to two doctors, both of whom, after examining me, said that I was afflicted with appendicitis and a tumor, and that the only thing left for me to do was to have an operation performed. I was advised to return to my home and make preparations for it. Down-hearted, I left their office, discouraged and nigh to despair. But I did not go home at once; I stopped at my sister's home to see her, and to tell her what had been told me by the doctors. My sister spoke to me about Christian Science and the many wonderful things it had accomplished for her. She told me about God, and that all things are possible to Him; and she asked me if I would not like to give Christian Science a trial. I replied that I would think it over first.

Send a comment to the editors
NEXT IN THIS ISSUE
Testimony of Healing
It is with gratitude for Christian Science that I am sending... 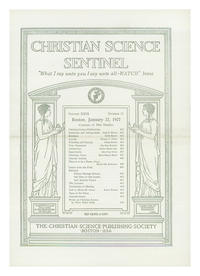