The first healing I experienced in Christian Science came...

I attended a lecture on Christian Science for the first time in 1914, and some literature was distributed after the lecture. This was read and found to be helpful, and later other copies were secured from the Christian Science Reading Room in that locality, and then the textbook a few weeks later. This was my first acquaintance with the teachings of Christian Science. It seemed I was interested only in the truth as explained in these writings, without any thought of physical healing. The truth about God soon replaced some false beliefs, bringing a consciousness of peace. The thought of God as the only Mind, instead of each individual having a separate mind, brought the proof of harmony. Various promises of the Bible became clearer to my awakened thought, with the assurance that Christian Science is the Comforter, bringing Jesus' sayings to our remembrance, as promised by him. This conviction has always remained, with some consciousness of the presence of Love.

Send a comment to the editors
NEXT IN THIS ISSUE
Testimony of Healing
In gratitude for what Christian Science has done for me,... 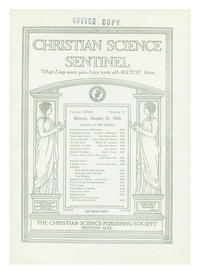