While the minister did not specifically name Christian Science...

Charles E. Heitman, Committee on Publication for the State of New York,—Utica

While the minister did not specifically name Christian Science in his sermon, as reported in your recent issue, nevertheless, certain of your readers have accepted his references to divine Mind, the unreality of matter, the purchase of a book, and the payment of fees in connection with spiritual healing as being indirect criticisms of the teachings and practice of the Christian Science religion. By way of correcting any false impressions that might have been conveyed by the minister's remarks, please permit me to say that it is contrary to the established policy of the Christian Science movement to urge the purchase of the several books in which Mrs. Eddy has set forth her religious teachings. Naturally, however, authorized literature on the subject is recommended to those who turn to Christian Science for help; but the same can be said of the Bible, the study of which occupies an important place in the daily life of the average Christian Scientist.

In respect to fees, it is quite true that a charge is made for the service of a Christian Science practitioner; but are not the ministers of other denominations paid for their services, and did not Jesus plainly say that "the labourer is worthy of his hire"? Criticisms of Christian Science practitioners for accepting modest fees sound strangely hollow to the many thousands who have been lifted from their beds of pain and suffering through the healing ministry of this religion. Interestingly enough, one of America's most distinguished jurists, the late Chief Justice Cullen of the Court of Appeals of this state, in speaking publicly on this subject, said: "In all Christian churches prayers are offered for the recovery of the sick, and all decent Christians ... believe in supporting their clergymen. The Christian Scientist has exactly the same right to be paid for his service." In considering this question one should remember, first, that an authorized practitioner of Christian Science is not permitted to engage in other forms of professional or business activity; and, secondly, that the payment of a fee is never made a requisite preliminary to a Christian Science treatment. Those who are unable to pay are never turned away; while those who can afford it usually prefer to pay. Assuming that our reverend friend was referring to Christian Science, it will be seen from the foregoing explanation that he is somewhat confused on the subject. This, however, is not surprising when we consider his expressed conviction regarding the reality of matter and his apparent confusion as to the precepts and practice of Christ Jesus. He would, for instance, lead us to believe that Spirit and the flesh are equally real and that the Master's divine mode of healing was nothing more than the practice of suggestive therapy. To accept such theory as correct would reduce the healing ministry of Jesus to the common level of that of a professional hypnotist. Certainly no warrant is found in the Scriptural record for thus regarding the Master's methods. At no time do we find him relying upon the supposed power of the human will as a remedial agency; and neither did he advocate such reliance on the part of his followers. On the contrary, he consistently counseled full reliance upon the will of God. Emphasizing this, he said plainly that of himself he could do nothing, and added, "The Father that dwelleth in me, he doeth the works."

Send a comment to the editors
NEXT IN THIS ISSUE
Article
In attacking the teachings of Christian Science, an evengelist... 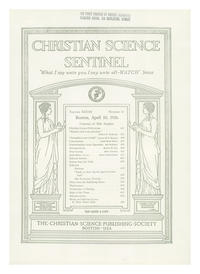