While the writer was studying the problem of church support two Biblical commands were noted; namely, that of Jesus, "Lay up for yourselves treasures in heaven," and that of the prophet, "Bring ye all the tithes into the storehouse." When things are placed away, they are usually to be found again if proper precautions have been taken to safeguard them. It is apparent that those who uttered these inspired commands recognized that God bestows abundantly, otherwise there would be no surplus to place in reserve, and that they were also cognizant of the need of greater spiritual activity in order that the supply of good might be increased through a clearer realization that true substance is purely spiritual.

To the materially-minded the idea that substance is spiritual is a myth, and they therefore know practically nothing of the process of laying up treasures for themselves and others "where neither moth nor rust doth corrupt, and where thieves do not break through nor steal." To them, contributing to church support may be merely a matter of placing money in the collection box. But material riches never contributed one iota to the support of that Church defined, in part, in the Glossary of "Science and Health with Key to the Scriptures" by Mary Baker Eddy (p. 583) as follows: "The structure of Truth and Love; whatever rests upon and proceeds from divine Principle." 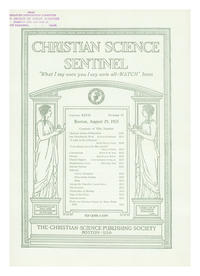