It has always been most helpful to the writer to make special effort to realize the spiritual meaning of the words in our hymns when singing them. One day after spending several months in the mountains and cañons of the West, she was singing our Leader's hymn beginning "Shepherd, show me how to go" (Poems, p. 14). When she came to the words, "O'er the hillside steep," she caught a tone of self-pity in her voice, and detected in it the inflection sometimes given this phrase by Christian Scientists.

Then a more spiritual meaning of it dawned upon her thought, for a recent experience of climbing the steep mountains had brought a sense of achievement, progress, more expansive vision, hidden beauties, all with the activity of the steep climbing. Thus it became clearer that the thought of a hard, laborious task of getting up the hillside was a wrong mental attitude. Mrs. Eddy knew, far better than we, the beauty and the reward awaiting every upward footstep. Though the way may seem difficult and steep at times, one can understand why, as our Leader says in "Science and Health with Key to the Scriptures" (p. 15), "Christians rejoice in secret beauty and bounty, hidden from the world, but known to God." 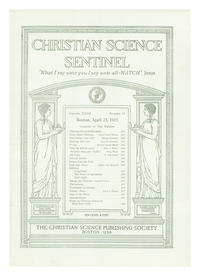