The Well of Sychar

An incident from which Christians through the centuries have derived both solace and inspiration is found in John's account of the meeting of Jesus with the woman of Samaria at the well of Sychar. The story includes some of the Master's most precious utterances, words fraught with deepest import. When the woman expressed surprise that Jesus, a Jew, should ask drink of one of her nationality, with whom the Jews were not supposed to have dealings, he replied that if she knew who had asked drink of her, she would, instead, have asked of him and he would have given her living water. And he further told her that whosoever should drink of the water of the well would "thirst again," adding, "But whosoever drinketh of the water that I shall give him shall never thirst."

It was, indeed, the living water which Jesus offered the Samaritan woman, the water of Life itself, the spiritual truth, the truth about God and man. It is greatly to the credit of the woman that she discerned the meaning of the Master's words sufficiently to prompt her to ask for this precious water of Life. In the conversation which followed, it is clearly revealed how accurately Christ Jesus was able to read mortal thought, for he told her certain facts of her own history. Then came that significant declaration, born of the profundity of his spiritual understanding, which utterly refutes the arguments of the unbeliever: "We know what we worship: for salvation is of the Jews." Jesus was not in doubt as to the character of God, the Father, whom he constantly worshiped. He could assert with the utmost assurance, "We know what we worship," thereby indicating his intimate knowledge of God and the divine attributes. 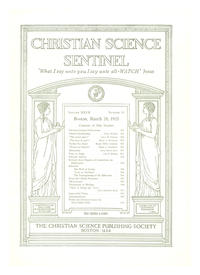