It was in the autumn of 1914 that I was first brought into touch with Christian Science in direct answer to prayer. At the time I was in great physical and mental distress. My husband was an invalid and had suddenly become much worse. War had been declared, and fear and distress were expressed all around. I had been suffering for years from an internal disorder, and had been through one very serious operation and was only waiting till my husband was well enough for me to leave him to go to London to undergo another. I was suffering intensely, but put thought of myself aside and considered only how I could help those around me. One morning it was necessary for me to go to a neighboring town to get things prescribed by the doctor for my husband. On arriving at the station I was shown into a carriage with two ladies, each having large bundles of papers. I saw the words "The Christian Science Monitor," "Christian Science Sentinel." I felt impelled to ask one of these ladies if I might look at a Sentinel, and she very kindly gave me one. I was so struck with what I read that I begged them to tell me more about Christian Science. Before we parted I was given an address where I could learn more, and where I could get Mrs. Eddy's book, "Science and Health with Key to the Scriptures."

Ultimately, I became an earnest student of Christian Science. At first it was entirely for my husband's sake that I read Science and Health; but, although he was helped, calmed, and comforted, and he acknowledged it, he said he did not want to know of any new religion; he was quite content and pleased with his doctors, who were doing their best for him. He knew Christian Science was doing me good. "You are so much happier, and you are better; you have not complained of pain for a long time," he said. This made me think, and I realized that I had completely forgotten that I had anything wrong with me. I had no pain, and all the swelling and tenderness had gone: I was feeling perfectly well. I have had no return of any of the old trouble; so that by just reading Science and Health, hoping thereby to benefit another, I was completely healed of something that doctors had said could not be healed without an operation, and perhaps not then.

Send a comment to the editors
NEXT IN THIS ISSUE
Testimony of Healing
Several years ago a tumor was removed from my back... 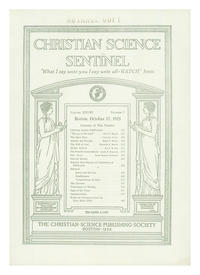