"An act of Providence" is a phrase frequently found in legal documents when reference is made to earthquakes, epidemics, and disasters of a nature not attributable to human invention. The expression, taken in connection with such circumstances, implies that God sends upon His children, on some occasions at least, disease, death, and destruction. But before accepting this assertion at its face value, as telling the truth about the nature and character of God and of His gifts, it were well to find what the Scriptures have to say on the subject.

The Psalmist assures us that peace is the result of loving God's law; while Paul, who in his various writings has much to say that is both inspiring and helpful concerning the nature of God's gifts, may be said to sum up his teachings on the question in his terse declaration in the sixth chapter of Romans: "The wages of sin is death; but the gift of God is eternal life through Jesus Christ our Lord." After declaring God to be the source of every good and perfect gift, James would not have referred to "the Father of lights" as being without "variableness" or "shadow of turning" had he believed God responsible for such destructive evils as earthquakes and epidemics. 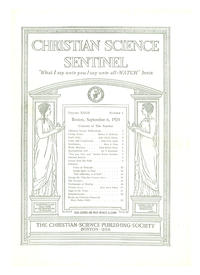