In an article in Bergens Aftenblad entitled "Christianity...

In an article in Bergens Aftenblad entitled "Christianity and the Upper Classes" by Rev. Georg Madsen, Christian Science is referred to in a manner which shows that the author has a very superficial knowledge of this religion. Christian Science should not be considered a new religion opposed to Christianity. On the contrary, it is the rediscovery of original Christianity as it was practiced by Jesus, his disciples, and the Christians of the first centuries, whose religion had the "signs following."

Jesus said, "He that believeth on me, the works that I do shall he do also." Mary Baker Eddy, the Discoverer and Founder of Christian Science, writes in her book, "Science and Health with Key to the Scriptures" (p. 271): "Jesus instructed his disciples whereby to heal the sick through Mind instead of matter. ... In Latin the word rendered disciple signifies student; and the word indicates that the power of healing was not a supernatural gift to those learners, but the result of their cultivated spiritual understanding of the divine Science, which their Master demonstrated by healing the sick and sinning. Hence the universal application of his saying: 'Neither pray I for these alone, but for them also which shall believe on me [understand me] through their word.'"

Send a comment to the editors
NEXT IN THIS ISSUE
Article
Christian Science healing is purely spiritual in purpose... 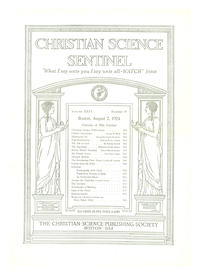