One bright sunshiny day the writer was sitting at her open window in Switzerland looking out on a beautiful cloudless sky. It was one often seen in that country, an ever fresh joy to behold. Suddenly there appeared from behind a small house near by a cloud of thick smoke. Sometimes smoke of different colors was seen to issue, as if different materials were being burned. The smoke rose from the ground in thick dark volumes. It was interesting to watch how, as it ascended and caught the sun's rays, it gradually lessened, became more transparent, and rising higher, grew whiter and clearer, finally breaking away until every vestige of its appearance was lost and the sky stood out again as if nothing had darkened it.

Pondering over this scene, the writer perceived what a lesson in the process of thought action could be taken from it, how God—Truth, Life, and Love—was at that very moment accomplishing purifying effects, obliterating the vaporous claims of so-called mortal mind, breaking up fear and the thick cloud of error, lifting human consciousness ever higher toward the realization of spiritual facts, and through His warmth and radiance was illuminating thought until finally it would rise to the full vision of the Christ-idea, and perfect man in his oneness with his divine creator would appear. 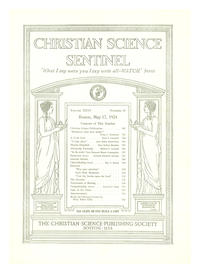