Our "privilege and duty"

All Christian Scientists know that the only way they can demonstrate Christian Science fully is by being obedient to every recommendation made by their beloved Leader, Mary Baker Eddy; for thus are they obedient to God, who inspired her words. Those who obey only in part will demonstrate the truth only in part. Often some slight lack of obedience keeps one from receiving complete healing. Therefore, all should endeavor to obey every word of advice in our Leader's writings, and so live Christian Science continually. In Article VIII, Section 14, of the Manual of The Mother Church, Mrs. Eddy says, "It shall be the privilege and duty of every member, who can afford it, to subscribe for the periodicals which are the organs of this Church." If all could realize that the understanding of Truth which comes from reading the periodicals would heal a belief in lack, they would the sooner see they could not well afford to be without them.

"The privilege and duty of every member"! How, then, can any member of The Mother Church, or of any of its branches, expect to be helped by Christian Science and to demonstrate it himself as he would like, if he shuns his privilege or duty? Has he a right to call himself a Christian Scientist if he does not obey the rules and By-laws of The Mother Church? The application which one signs when asking to be admitted to membership in The Mother Church, specifies that one who "can enter into full fellowship with the Tenets and Rules of The First Church of Christ, Scientist, in Boston, Mass., is eligible to membership." Is one entering into full fellowship with the rules of The Mother Church, as embodied in our Manual, unless he is obeying them in so far as he understands? The word "privilege" is derived from two Latin words, meaning private and law. A definition of the word in Webster's dictionary is, "A right or immunity granted as a peculiar benefit, advantage, or favor." Therefore, the privilege becomes a law that every member of our church should subscribe to our periodicals. This law, being a privilege, is "granted as a peculiar advantage," as we have just seen. It is one of the greatest advantages possible that we should be able to read these periodicals in order to glean from the truth therein help and healing. Any one who has read our periodicals will vouch for the help received from reading them, and will affirm how greatly he values this privilege. 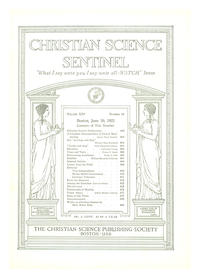