I wish to express my deep gratitude for the many blessings...

I wish to express my deep gratitude for the many blessings which Christian Science has brought into my life. I first became interested in this religion because of the beautiful change which it had wrought in the life of one who was dear to me. I began attending the Wednesday evening testimony meetings and reading the textbook, "Science and Health with Key to the Scriptures" by Mary Baker Eddy. Although in need of healing at the time, I did not even know that Christian Science healed. However, to my great surprise and delight, I found in a very short time, and without having had any treatment whatever, that I was completely and permanently healed of stomach trouble, from which I had suffered since childhood. Notwithstanding the fact that our family physician had told my mother I would outgrow this condition, it had been gradually becoming more aggravated.

This healing increased my interest, and I continued to study in order to gain understanding. It had come as a surprise to me, and without any effort on my part; and I scarcely realized what it meant. Later on, however, a severe throat trouble presented itself; and it was in the working out of this problem I learned that there are times when a practitioner can do much work for one, but that the time must come when one must awake,—watch and pray, "stand porter at the door of thought" (Science and Health, p. 392), and work out one's own salvation. It was about six months before this trouble was completely overcome; but, as I had so often heard other people without myself realizing what it meant, I have always been grateful for this slow healing, because it resulted in much spiritual growth, and placed me on a firmer foundation. I was obliged to work with the dear practitioner who so lovingly helped me, which meant that I had to correct my thought, to hold fast to the truth, and, "having done all, to stand."

Send a comment to the editors
NEXT IN THIS ISSUE
Testimony of Healing
It is with a deep sense of gratitude to God for the... 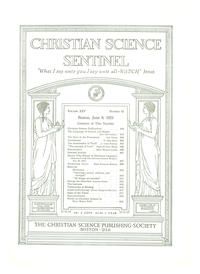