Reading a testimony of healing of a condition so similar...

Reading a testimony of healing of a condition so similar to my own was such a help to me that I want to pass mine on in the hope of helping another. In six years I had had five operations on my nose for an abnormal growth. Later another started and grew rapidly, so that I breathed through the nose with difficulty, and had a noticeable huskiness of speech. I called on a Christian Science practitioner for treatment and was helped temporarily, but the condition returned in a more severe form. When it was at its worst, and I was also having an attack of grippe, I was entirely healed in Christian Science, the growth passing from the nose without a particle of sensation. A gathering in the ear was healed at the same time. I feel that I have everything to be thankful to God for, and am grateful to Mrs. Eddy for the understanding of Truth she so lovingly gave the world.

Send a comment to the editors
NEXT IN THIS ISSUE
Testimony of Healing
For nearly eleven years before Christian Science found... 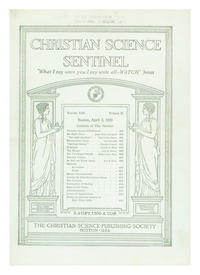