Such a sense of gratitude for the spiritual interpretation of the Scriptures given us by our Leader, Mary Baker Eddy, comes when reading the twenty-second chapter of Genesis that I feel led to express it, hoping thereby to help others who are taking the human footsteps which are leading up to the light of spiritual understanding. When Abraham was told by God to take his son, his only son, Isaac, and offer him for a burnt offering, he never for an instant faltered, but arose early in the morning; that is, he acted with immediate obedience, to take every step required in the greatest sacrifice that he could probably have been called upon to make as a proof of his fidelity to Principle.

His willing obedience gave him strength to saddle his own ass; to cleave the wood himself, not sending his servant out to do it while he remained with his son in what he thought were the child's last earthly hours. And when it came to the final tests of building the sacrificial altar, laying the wood upon it, binding his son, and even laying the lad upon the wood, he did not call upon his two young men for help, but walked alone with God, knowing every step of the way that God was guiding him, and—behold his reward! He found that what seemed to be a sacrifice was, in reality, an opportunity to prove his faith and confidence in the one power, God, good. And instead of losing his son, the lad was restored to him. God told Abraham that He would bless him and multiply his seed as the stars in heaven and as the sand upon the seashore, and in his seed should all the nations of the earth be blessed, because he had obeyed His voice. 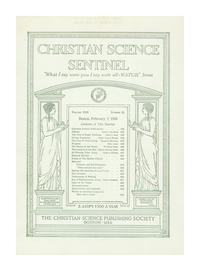