Before coming into a knowledge of the truth, the writer had great sympathy for what is generally known as a sensitive person, one whose feelings are easily hurt. In the early days of her study of Christian Science and her contact with those of this faith, their means and methods seemed not a little peculiar, until she came to look upon some as lacking in sympathy, being unable to see that the lack was of understanding on her part. It was not long till she found herself saying, "I wish they had not said this," or, "I wish they had not done that," always thinking there could have been a better or kindlier way. Now where had her sensitiveness led but into the byways of criticism and self-righteousness; for did not this attitude imply, "I would not do so"? It has been said, "Were we to criticize only those whose efforts we can excel, what a great silence there would be in the world."

In looking back she can now see that it was material selfhood, alias mortal mind, that wanted sympathy, and what then appeared as lack of tenderness might have been divinely wise and loving. In "No and Yes" (p. 30) Mrs. Eddy tells us, "Sympathy with sin, sorrow, and sickness would dethrone God as Truth, for Truth has no sympathy for error." In her Message for 1900 (p. 8) she also reminds us "that sensitiveness is sometimes selfishness." Let us leave behind such selfishness or self-love, and turn to true sensitiveness which belongs to the pure in heart, that quality by which we are warned of danger, or whereby we receive right impressions. It is true intuition or spiritual sensitiveness whereby we sometimes grasp the truth without a direct line of reasoning and are enabled to work intelligently, knowing the certainty of Truth as the victor. 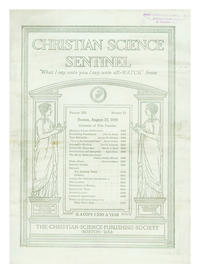