"Enter into thy closet"

Anyone who follows the testimonies of healing through Christian Science as printed in our various publications or as given in the Wednesday evening meetings, cannot fail to have noticed the frequency with which gratitude is expressed for a fuller knowledge of the Word of God through a study of Christian Science. And this unfoldment of the Scriptures is as grateful a surprise to the lifelong student of the Bible as to the one who is studying its pages for the first time. On page 320 of "Science and Health with Key to the Scriptures" Mrs. Eddy declares, "The one important interpretation of Scripture is the spiritual." If the Bible is read solely with the spiritual interpretation kept in view, the Bible student will see familiar passages constantly illumined with a new light and well-known extracts glow with a deeper significance as he progresses in spiritual understanding. The beginner, as the beauties of the Scriptures unfold new visions to him daily, will wonder why no one told him before of the wealth of promise and inspiration contained in the Bible, at which many scoff and which in so many homes has fallen into disuse.

Early in his progress in Christian Science the pilgrim learns to look behind the mere words to find the spiritual interpretation, which Mrs. Eddy declared was of first importance and which she grasped to such a remarkable degree. An instance in point was unfolded to the writer recently, and is handed on in the hope that it may prove of as much inspiration and help to some one else as it did to him. In reading that part of the Sermon on the Mount in which the Way-shower gives direct instructions regarding prayer we find these words: "But thou, when thou prayest, enter into thy closet." In commenting on this passage Mrs. Eddy says (Science and Health, p. 15), "The closet typifies the sanctuary of Spirit." 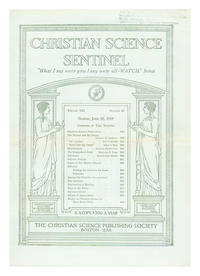