In the light of the teachings of Christian Science, the story of Joshua before the city of Jericho takes on a richness of meaning very pertinent to the stressful times in which we live. The reader will recall the details of the story,—how Joshua, standing in view of the city, beheld an angel, "the captain of the Lord's host," who instructed him how he could successfully besiege the city. Judged by ordinary military methods, never was an attack more futilely conceived. The army was instructed to circle the wall of the city once a day for six days and seven times on the seventh day, accompanied by the ark of the Lord and seven priests blowing on seven trumpets. Upon the completion of this consecratory maneuver, the people were to shout with a great shout. That was all. It was promised that thereupon the wall of the city would fall down flat. And so it did. But mortal mind is not to be so easily satisfied. Why, it insists to itself, was it necessary to compass the city for seven days? What had this to do with the event? Why not shout at once and be done with it? This essentially human question has been explicitly answered through the profound insight of the Discoverer and Founder of Christian Science, Mary Baker Eddy. In her book "Miscellaneous Writings" (p. 279), referring to the siege of Jericho, she remarks, "The six days are to find out the nothingness of matter; the seventh is the day of rest, when it is found that evil is naught and good is all."

It was not the reverberation of the people's shout nor the blast of the seven trumpets that flattened the wall of Jericho; it was the finality of their confidence. "Shout," commanded Joshua, "for the Lord hath given you the city." Faith as absolute as this is irresistible, and able to cause the densest structure of false material beliefs to topple over, no matter how strongly fortified. But faith, to be thus irresistible, must be scientifically based; and to be scientifically based, it must include an understanding of the unreality of matter. Had Joshua believed in the substantiality of matter, he could not have declared while the city wall still stood intact before him that the Lord had given him the city; neither could the people have shouted as heartily as they did; neither would the wall have fallen! It was doubtless not for Joshua's sake, however, so much as for the people's sake that they were bidden to march round the city for six days, "to find out the nothingness of matter." Joshua's faith was proved at the first, when before "the captain of the Lord's host" he loosed his shoe from off his foot; but the thought of the people had to be elevated and consecrated to be equal to the occasion. 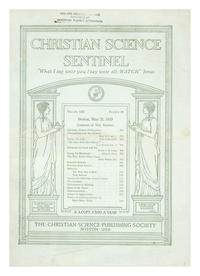