A critic quotes Christian Science as declaring that "the...

A critic quotes Christian Science as declaring that "the less mind we have the better." Now, of course there is some mistake here; Christian Science makes no such statement and entertains no such absurd notion. On the contrary, it makes a constant appeal to higher intelligence and enjoins us to have that mind which was also in Christ Jesus as distinguished from the material or carnal mind which Paul declares is death.

What Christian Science does say is this: "The less mind there is manifested in matter the better" (Science and Health, p. 489). Few people will have any difficulty in accepting this as true. The deplorable effect on an individual of permitting his mind to run in material and sensual channels, catering to the pleasures and pains of the body, is apparent to every one. All people concede the soundness of Paul's counsel to be absent from the body and be present with the Lord.

Send a comment to the editors
NEXT IN THIS ISSUE
Article
The apostle James tells us: "Ye ask, and receive not, because... 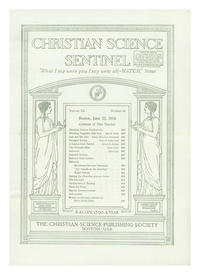