I would like to express my gratitude for all that Christian Science...

I would like to express my gratitude for all that Christian Science has done for me. Some time ago my arm became quite useless, causing me much suffering and many sleepless nights. I asked for help in Science from a member of the family, and soon regained the use of the arm. Six months later the trouble appeared again, and this time I determined to do my own Science work, with the result that I was absent only one day from my duties and by the end of a fortnight was quite well.

I have also had much help when taking examinations. I was asked to enter for a difficult examination at rather short notice; but I took on the work. The first two or three days I became discouraged, and the thought presented itself that it was impossible for me to do the work; but on top of this came the true thought that God worked with me to do the will of wisdom, and that as the idea of God I reflected the one intelligence, which does not fail. With this understanding the examination was successfully passed.

Send a comment to the editors
NEXT IN THIS ISSUE
Testimony of Healing
When I first attended a Christian Science meeting about... 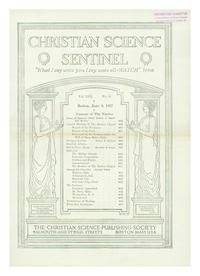