On several occasions recently the public has noticed in...

On several occasions recently the public has noticed in "The Voice of the People" the linking of two teachings with Christian Science in a way likely to give the reader the erroneous impression that all three are alike. Now comes another writer repeating that mistake and making an effort to persuade some one that Christian Science differs from the teachings of Jesus. It cannot be stated too emphatically that Christian Science is based absolutely on the truths of the Bible as interpreted and demonstrated by Jesus; hence it necessarily differs from all the religions, teachings, or philosophies unlike the truth he taught.

Honest, sincere people may entertain their own theories, and theologians may advance man-made arguments, but what Jesus really taught must be proved, not by theories or theological dogma, but by the method he established, i.e., the healing of both sin and disease. He entered into no theological argument with the messengers from John the Baptist, but pointed to his healing works as proof of the Messiahship. Christian Science also points to its healing works as proof that it is identical with Jesus' teaching. "By their fruits ye shall know them." That Jesus' indivisible command to preach and heal was not meant for a limited time or territory is evidenced by the historical fact that for three hundred years after the crucifixion Christians healed the sick by spiritual means. There was an "undivided garment" (Science and Health, p. 142) until a material interpretation of the Bible crept into the early church.

Send a comment to the editors
NEXT IN THIS ISSUE
Article
Speedy action was taken by the Christian Science organization... 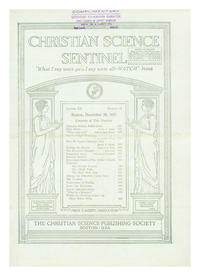