I first heard of Christian Science over two years ago....

I first heard of Christian Science over two years ago. Before that time I was in a state of weakness and mental depression, which condition may have been induced by my having drawn away from God. Still, I was earnestly searching after the truth, and through a wonderful dispensation was led upon the right road. My first knowledge of Christian Science was received through a lecture on this subject. I was filled with the greatest astonishment, as I had no idea there was something in the world which could free us from sin, disease, poverty, and all manner of inharmony. The impression which I received at this lecture, little as I understood the subject presented, proved such an inspiration and had so liberating an influence that I realized then and there that Christian Science meant salvation from all my troubles.

Soon after that evening I called on a practitioner of this teaching and asked her to treat me, which she did in the most loving way. Through her faithful, indefatigable work, I became a different woman. The application of the teaching freed me of a lung trouble which had stayed with me despite the fact that I had spent years at a sanatorium trying to get rid of it. Life at times was a misery on account of a nervous heart condition, which would bring me very low and make me feel very depressed. Starting from a false premise, I believed that I must accept and patiently submit to this trial as ordained by destiny. I have now learned to apply Christian Science under all circumstances and in all cases, no matter what their nature, and whenever properly understood and applied, I find it works beneficially.

Send a comment to the editors
NEXT IN THIS ISSUE
Testimony of Healing
With heartfelt gratitude I send this testimony of healing... 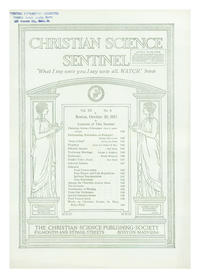