From Bondage to Freedom

In the twelfth chapter of the Acts of the Apostles is chronicled a remarkable incident, that of Peter's imprisonment and the manner in which he was released. From this narrative Christian Scientists may glean many valuable lessons. Though all appeared dark and the prison walls impenetrable, yet the faithful band of Christians, "of one mind," united in prayer for Peter's deliverance. We read that they prayed "without ceasing." Doubtless Peter too was realizing the truth, his freedom in divine Mind, and thus naturally when the angel-message of life and liberty appeared to his consciousness he was able to receive it; for he had been cleansed of wrong thinking, and his thought was permeated by rays of spiritual light. In the ninety-first psalm we read, "He shall give his angels charge over thee, to keep thee in all thy ways," and this was completely demonstrated in this instance.

Without any hesitancy Peter in obedience and confidence arrayed himself in garments of faith and sandals of trust, and followed, not losing sight of this message of Love, though he saw but dimly, for he thought it a vision and knew not at first that he was free. Perhaps he was dazzled and overpowered for a time by such a sudden, wonderful revelation of angelic presence; nevertheless, by following and obeying he was enabled to see clearly, to know the truth, and to realize his freedom. 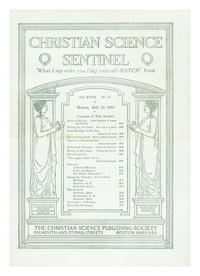