It has been my privilege to experience God's care and...

It has been my privilege to experience God's care and omnipotence since I have learned through Christian Science that man is His perfect offspring, hence forever intact. My little two year old boy was playing indoors at my side, when a set of heavy roebuck horns dropped from the wall and struck the child on top of the head. As may easily be imagined, my sense of fear was very great at first; still I was at once able to declare the truth of being. The child's head was bleeding and he was crying loudly, but I tried to realize the presence, omnipotence, and abiding love of God. On washing the little head I saw two holes caused by the points of the horns, yet without allowing myself to entertain any sense of worry I quieted the child, and after a short time he was bright and playful, then took nourishment as if nothing had occurred, and went to sleep. I used no remedies of any kind, neither did I observe any hygienic law. Two days later the holes had entirely disappeared.

I think of this instance of help received as an especially beautiful proof of the care of ever-present Love, although it is but one of many which it has been my privilege to receive. I would like also to express my profound gratitude to Mrs. Eddy, the Discoverer and Founder of Christian Science, for having shown us the way to Truth, and for imparting through her works a vital knowledge of God and the truth of being.

Send a comment to the editors
NEXT IN THIS ISSUE
Testimony of Healing
Four years ago I began the study of Christian Science,... 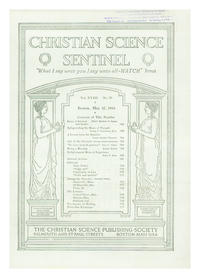