THE real Christian Scientist is not discouraged by criticisms ignorantly made against Christian Science, even though they seem severe. Jesus said, "These things will they do unto you, because they have not known the Father, nor me," and the reason given by Paul for his part in the persecution of Christians was that he did it ignorantly, thinking that he was doing God a service. Jesus said to the Jews, "Ye do err, not knowing the scriptures, nor the power of God." When he was hanging on the cross he said of his persecutors, "Father, forgive them; for they know not what they do." The criticisms offered against Christian Science may seem to those who use them to supply good reasons for opposition, but to those who are enlightened along spiritual lines, they are utterly without foundation.

Many of these criticisms are attempts to minimize the evidence, so as to make it less convincing. In the twelfth chapter of John we see that many were attracted to Jesus because of the great works of healing which he did, but "they came not for Jesus' sake only, but that they might see Lazarus also, whom he had raised from the dead." That is, they wanted to see the evidence. But, it is added at the tenth verse, "the chief priests consulted that they might put Lazarus also to death; because that by reason of him many . . . believed on Jesus." That is, they consulted how they might destroy the evidence of Christ's power over death and the grave. 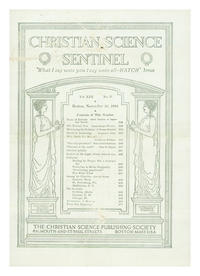