"ALL LIVE UNTO HIM."

To the earnest student of Christian Science nothing is more striking than the way in which statements in the Bible are illumined as the understanding begins to unfold. An example of this is the reply of Jesus to the Sadducees, related in the twentieth chapter of St. Luke's gospel. Even the literal meaning of the text which tells us that God "is not a God of the dead, but of the living: for all live unto him," has breathed comfort to countless numbers who believed in the "shadow of death," but Jesus says, "He [God] is not a God of the dead, but of the living," words which in the light of a new wisdom mean very much more than this. First of all, who are the dead? To this it may be answered that they are those wrapped in the sleep of material sense, in the sense of sin, in the belief of mortality; but Christian Science tells us that in reality there are no such, that there is no material sense, no consciousness of sin, sickness, or death, "for all live unto him." What is it to live? It is "to be spiritually minded," says St. Paul; it is to be "quickened by the Spirit;" it is to be conscious only of joy, power, purity, love, activity, immortality.

The text now stands out as a scientific statement: "All live unto him." Paul says that we "live, and move, and have our being" in God; that is, for God, by God, in God, to God. That we do not recognize this to be so in our intercourse with our fellow men, does not alter the fact; it is a childish mistake. A scientific statement, we know, can be proved, and we should turn St. Paul's admonition to the Romans into daily and hourly practise and reckon ourselves and others to be "alive unto God." 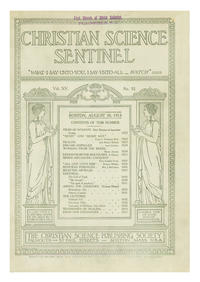