Mrs. Eddy has written extensively on this subject and has left no doubt as to her understanding respecting it. Not the least significant of her explanations is that found in "Rudimental Divine Science" (p. 1), where she says, "The word person affords a large margin for misapprehension, as well as definition." She then proceeds to enumerate the various meanings of the word which are given by lexicographers; as, for example, "'a living soul; a self-conscious being; a moral agent; especially, a living human being, a corporeal man'" (p. 2).

It is evident that none of these definitions can be correctly applied to Deity, and the important question is this, Which of these terms, if any, may be fittingly used, and who is to be the judge as to the correctness of any given appellative? One cannot intelligently choose a definition of God from the dictionary unless he himself has a demonstrably true knowledge of Him, and who, we may ask, has the authority to define Deity? The importance of such a knowledge is expressed in the words of the Master, "This is life eternal, that they might know thee the only true God, and Jesus Christ, whom thou hast sent." Here the Saviour sets forth in unmistakable terms the fact that the eternity and substantiality of being, for which all religionists seek, is to be obtained only through the understanding of God and His manifestation. On another occasion, when imparting a lesson in the rudiments of divine Science to the woman of Samaria, the Master said that God is "Spirit," and thus he gave a standard and authoritative definition of Deity.

Send a comment to the editors
NEXT IN THIS ISSUE
Article
"BE STILL, AND KNOW" 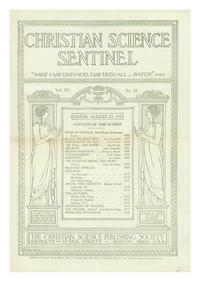