The writer has abundant reason to be grateful for Christian Science. The best day of his life was that on which he was led, even as a skeptical critic, to peruse the Christian Science text-book, "Science and Health with Key to the Scriptures," and the health and strength and power to labor which he enjoys today, he owes to the study of that wonderful book and the other writings of Mrs. Eddy, together with the elucidating and helpful articles which are always to be found in the periodicals issued by the Publishing Society.

Christian Science healing is mental. Mrs. Eddy says, "Its pharmacy is moral, and its medicine is intellectual and spiritual, though used for physical healing" (Science and Health, p. 460). There is and can be no real healing, in Christian Science or out of it, which has not its foundational basis in the healing of erroneous thought; and Christian Scientists learn that the root of all wrong (diseased) thought is a belief of being apart from God; the belief of life, power, and intelligence other than in omnipotent Mind; the belief of mind in matter. They experience also, in varying degree, that as the understanding of this fundamental healing becomes gradually fixed in consciousness, moments occur in the daily life which bring heaven to earth, when the truth of being shines as clear as a beacon-light or the noonday sun; moments, as Ballou writes,— 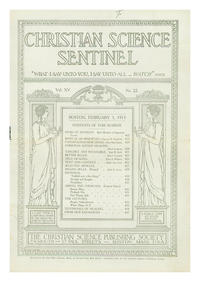