A SHORT time ago I met a young woman whom I had not seen for a number of years, and almost the first thing she said was, "Well, I suppose you are still rejoicing in the study of Christian Science." Then she told me that she greatly desired to acquire a working knowledge of the subject herself, but there seemed so much family opposition that she was making very little progress. The mother of the young woman is the daughter of one orthodox minister and the wife of another, and her religious convictions are very much set. The daughter told me that she had said to her mother recently, "Well, mother, you will have to admit that Christian Scientists are the happiest people on earth. They are optimistic, cheerful, contented, willing to live and let live, and altogether they seem to have found the secret of joyous existence." The mother replied, "That is no argument in favor of Christian Science; any people who would read the Bible as much as they do would receive the same benefit." The strange thing is that she was so blinded by prejudice that she failed to see the contradiction of her own argument.

An incident, however, brought to me a realizing sense of what Christian Science has done for me in the direction indicated by this particular young woman. Before I learned from the study of "Science and Health with Key to the Scriptures," by Mrs. Eddy, that the "spiritual import" of the Bible has an "application to all ages, past, present, and future" (Explanatory note, Christian Science Quarterly) I tried in vain to read the Bible with any degree of understanding, interest, or profit. I had tried to study it with considerable effort, simply because I had been embarrassed by my ignorance of the book, but I found its reading dry, tiresome, and uninteresting, until I learned in Christian Science that God—the same God who in the beginning created the heavens and the earth; the God who caused the waters to part for the Israelites; the God whom the psalmist said "shall give his angels charge over thee;" the God who said to Isaiah, "Fear thou not; for I am with thee," and to Ezekiel, "Turn yourselves, and live ye;" the God who sent His angels and closed the lions' mouths when Daniel was thrown into their den; the God who sent His Son into the world with a message of peace and good will toward men; and the same God who through that Son healed all manner of sickness and all manner of disease and who abolished death and brought life and immortality to light,—that God is revealed in Christian Science as "universal, eternal, divine Love, which changeth not and causeth no evil, disease, nor death" (Science and Health, p. 140).

Send a comment to the editors
NEXT IN THIS ISSUE
Article
In his continued discussion of Christian Science our critic... 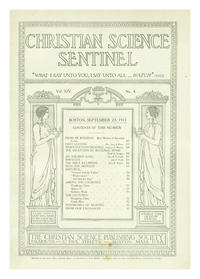