It is with the deepest gratitude that I send my testimony...

It is with the deepest gratitude that I send my testimony to the Sentinel. When I read our periodicals I feel that I have as much to be grateful for as any one whose testimony I have ever read. All my life I had been very delicate, and as a girl at school I had the sympathy of my teachers and friends because of repeated attacks of illness, three of which lasted from one to six months. Each time there was little hope of my recovery, but I managed to struggle back and resume my studies. At the time of the birth of my little daughter, in June, 1905, there were employed two of the best physicians in Madison and one of the best surgeons in the Northwest. They were agreed that I would not live through the ordeal, but again I struggled back so as to be up and around. After examinations and tests which covered a period of five months, the doctor in charge said that with the greatest care I might live two or three years longer. I was then twenty-one years old.

At this time Christian Science was suggested to me by my mother, who had been visiting an aunt in Chicago who was a Scientist, and had become interested; but I refused even to hear it mentioned, as I was under the impression that Scientists were fanatics. Just a few days after this, however, the extremity which proved to be God's opportunity came. At noon on this day I was taken with great pain, and after trying to reach several doctors by telephone and not succeeding, my mother asked it she might telephone a Christian Science practitioner. I consented, and in fifteen minutes I was able to leave my bed and do some work. Knowing nothing of Christian Science, I allowed false sense to tell me that the pain would have left any way; nevertheless, my curiosity was aroused to such an extent that I would go to my mother's room and read in "Science and Health with Key to the Scriptures," when no one was there.

Send a comment to the editors
NEXT IN THIS ISSUE
Testimony of Healing
Christian Science was brought into our home a few... 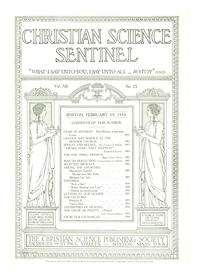