THE NOTHINGNESS OF EVIL

Have the teachings of Christian Science regarding the belief of evil, or has the attitude of Christian Scientists toward that belief, changed? They have not. In Science and Health, and in her other writings, Mrs. Eddy has always contended for the absolute allness of God, and for the consequent absolute unreality of what is called evil; and she has pointed out to her students that this belief must be met and overcome on the basis of its nothingness. Nowhere and at no time has she encouraged Christian Scientists to ignore the suppositional activities of this belief, but on the contrary she has repeatedly admonished them to guard their thought against its insidious claims. The insinuation that Christian Scientists are beginning to make something of evil is but a specious attempt of error to discountenance Christian Scientists for taking notice of it. "Leave us alone, what have we to do with thee," is ever the plea of error against the truth that is destroying it.

Possibly it might seem to some, who acknowledge reality in both good and evil, that for Christian Scientists to be consistent to their declaration of the allness of God, they should utterly disregard the seeming existence and power of evil. But it should be remembered that the one purpose of Christian Science is to destroy the effects of belief in this seeming opposite to good, and thus deliver mankind from their hypnotic obedience to its illusions; and that, in fulfilling this purpose, it is essential that so-called evil be correctly defined. Although, in the light of Christian Science, Mrs. Eddy has found and declared evil to be nothing, it is not therefore implied that Christian Scientists fully realize or demonstrate this scientific deduction, but they are thereby led to see evil's unreality and powerlessness and so protect their consciousness from its aggressive claims. 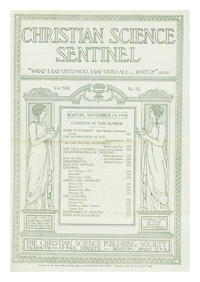