Christian Science interprets the atonement as a successful...

Christian Science interprets the atonement as a successful effort on the part of Jesus to exemplify or prove to the world the true unity which exists between man and God, the unity and relationship of Father and child, of creator and creation. He prayed, "Holy Father, keep through thine own name those whom thou hast given me, that they may be one, as we are." His human life, culminating in the crucifixion and resurrection, was undertaken in order to encourage the human race by showing them that there is a way out of the mortal beliefs of sin, disease, and death, a way out of the illusion that man has ever been separated from God. Salvation, then, in Christian Science is not mere passive acquiescence in a belief that Jesus is the Saviour. ... "Work out your own salvation," said Paul, "with fear and trembling. For it is God which worketh in you both to will and to do of his good pleasure."

Jesus is described as the Wayshower, and he said, "If ye love me, keep my commandments," and among other commandments that he gave were those to "heal the sick" and to "love one another." Christian Scientists believe thoroughly in the Scriptural record, and they do not reject the texts cited by your contributor, but they have their interpretation for them and this interpretation is spiritual and scientific. Your contributor quotes among others the text, "For the love of Christ constraineth us; because we thus judge, that if one died for all, then were all dead: and that he died for all, that they which live should not henceforth live unto themselves, but unto him which died for them, and rose again." The Christian Scientist takes much comfort from this text, because to him it means that Jesus' triumph over the grave was a glorious assurance to stricken humanity that the grave can be overcome by the power of God in the same manner as Jesus overcome it. Did he not say, "If a man keep my saying, he shall never see death"? His patient suffering, his death and resurrection, were for an example, to show mortals that these evils do not have power over man, when man is governed by God. St. Peter says, "Because Christ also suffered for us, leaving us an example, that ye should follow his steps." It is, then, an active imitation of Jesus' career, a demonstration or proof of the truths he taught, that accomplishes our salvation and that will finally usher us into heaven, according to Christian Science.

Send a comment to the editors
NEXT IN THIS ISSUE
Article
The movement to live as Jesus lived—to do what Jesus... 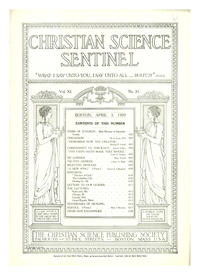