The headline, "Church's Duty not Healing of Body," in...

The headline, "Church's Duty not Healing of Body," in the Inquirer some days ago, virtually threw down the gauntlet to all Christians on the question of religious healing. No one having volunteered a reply in the interval, I should like to present a few thoughts in behalf of Christian Science, which, as is generally known, contends that the teaching of Christ, properly understood, provides physical as well as moral cure for the sick and sinful. Even the most superficial study of our Saviour's teaching and works discloses the purpose and result of his efforts to be physical and moral regeneration and restoration. In fact, he demonstrated that both sickness and sin are the common product of evil thought.

It may be that the world has not been ready until the present hour to lay hold upon this fact and utilize it for the betterment of mankind; but of one thing we are certain, and that is the undeniable fact that Mrs. Eddy, the Discoverer and Founder of Christian Science, has set in motion a force which is gathering impetus with every hour, and is bringing to thousands a realization of the practical helpfulness and effectual cure for human ills which is embodied in Christ Jesus' teaching and example. To contend, then, that the "Church's duty is not the healing of the body" is to attempt to divide that seamless robe, the mere hem of which the woman in the throng touched and was made whole. Sin and disease are non-existent to human sense only in the degree in which they are obliterated and cast out, and to strive for this purification and to contend for its practical possibility is surely the duty of every Christian.

Send a comment to the editors
NEXT IN THIS ISSUE
Article
In a recent issue of The News Tribune, an English... 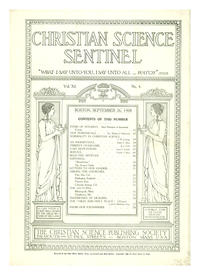