[Captain Douglas Baynes, who contributes the article on Christian Science to this week's Onlooker, is one of the growing band of English officers who have adopted Christian Science while passing through the Staff College. On his return to India he resigned his commission in the Bengal cavalry to devote all his energy to the Cause he had at heart. In our next issue Mr. Herbert Fletcher, a son of Colonel Fletcher of the Scots Guards, who at one time was the late Marquis of Dufferin's aide-de-camp in Canada, will contribute an article on "The Mystery of Christian Science."—Editor Onlooker.]

The statement that Christian Science declares sin and sickness to be unreal seems so absurd, until the basis is understood from which that statement is made, that it generally arouses considerable antagonism. It is my object in this article to examine the basis on which this statement regarding sin and disease is made, and so remove its seeming absurdity. I think I may assume that we have all been more or less sensible of sin and sickness in our own lives and in the lives of others, and I am sure we would all be glad if all evil, whether expressed in mental, moral, or physical disorder, could be banished from the world; but before we can hope to evolve any process by which evil may be banished from human experience. I venture to suggest that we must first answer the question—What is truth? 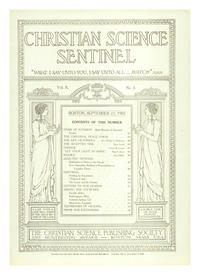