"OUT OF THE MOUTH OF BABES"

One was a little fellow, the other a thoughtful man. It was past mid-day and the bright sun of midsummer was flooding the "homey" room, but across the strong, sweet features of the man lay the shadow of pain. He had been making his way, not so rapidly as many, out of dark years of suffering into the light again. The boy stood watching him. "Won't Love stop the pain, papa?" The man shook his head wearily. He was pondering in himself wherein he might have failed to realize the good. "I think Love will," added the boy; then—after a moment's silence, very quietly—"I'm going to help you, papa."

The wee, tousled head of gold sank close to the shaggy gray one; one little arm stole about the father's neck; the baby knees bent in attitude of prayer beside the low couch, and all was still. Somewhere in the room a tiny clock ticked out the quarter seconds; but the man and the boy were oblivious to the world of time. There is a consciousness which touches heaven, wherein time is lost in a glimpse of the eternal. 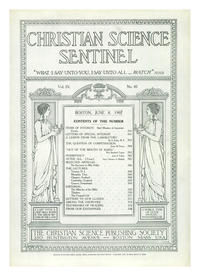