A few days since a trifling incident brought to my consciousness a childhood thought which the years had not wholly obliterated, and from which I am learning valuable lessons. As a child, if a piece of work went wrong and I could not bring it up to my idea of perfection, but one thing ever suggested itself to me as a possible remedy, and that was to burn it all up, and begin over again. As the years went on and I began to encounter the real vicissitudes of life, I many times found it in my heart to wish that I might put into effect my childish thought—"burn it all up, and begin over again;" but woe was me, this was not so easily accomplished. I had begun too many things which had so woven themselves into the warp and woof of my life that I could not escape the inevitable consequence, or hinder the work, so poorly begun, from going on and on, as it seemed to me then, in one eternal and endless round.

I was continually tugging away at tangled skeins, and working vainly against what seemed to be an inexorable fate. Weary of the strife, sick, disappointed, heavy laden, I longed for rest and peace. When the Comforter came to me, was I ready to wipe out all of material sense and self; give up my false ideals of life and its joys, let go of matter and its illusions, and live in Spirit, God? Was I ready for this full and sufficient remedy for all my woes? The answer must be tentative. I was ready to be relieved of pain, ready for the benefits of Christian Science, ready for the "loaves and fishes;" but I was not ready for the work of purification; the baptismals of fire; the regeneration of thought; the spiritual purgation which must ever precede, or go on in even ratio with, the true healing of the body; in a word, I was not ready to "burn it all up, and begin over again."

Send a comment to the editors
NEXT IN THIS ISSUE
Article
NOT BY FORCE, BUT BY REASON 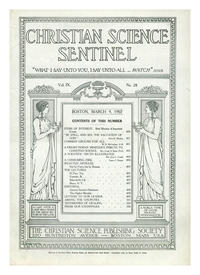