I went to the Rochester (N. Y.) City Hospital on March...

I went to the Rochester (N. Y.) City Hospital on March 1, 1899, and was there until the end of May; during that time four operations were performed for ovarian tumor. At the end of May, three days after the last operation, I was sent home on a stretcher in the ambulance. Notwithstanding that the operation had been pronounced a successful one by my physician, they told me, after I was healed by Christian Science, that they thought I had been sent home to die. The trouble following the operation was that the wound did not heal, but left a running sore. This wound they cauterized every other day, besides giving other supposedly necessary treatment, until at last, in response to my questioning, my physician said it might never heal unless I became strong enough to submit to another operation, and that he thought I might be sufficiently strong by fall. The operating surgeon and consulting physician agreed with this view of the case. After my return home, and before I could walk, a strong abdominal bandage was put on, with the instruction that I must not at any time stand on my feet without it. These conditions continued unchanged up to the latter part of July, at which time the subject of Christian Science was brought to my attention. I knew nothing whatever about it, therefore had little faith, at least not enough to wholly dismiss my physician. Shortly after this, however, I decided to give Christian Science a week's trial, and so told the doctor that I would not be in for a week.

The lady who told me of Christian Science loaned me some Sentinels, and in these I saw frequent reference to Science and Health, so asked the lady if she had the book. In the morning her husband left her copy with me, saying he would call for it at four o'clock on his way home. Up to this time I had for two years been obliged to wear glasses for reading and sewing, but in my haste to see the book I forgot that I did not have them on, and began to read, not stopping even for lunch. I was alone in the house until the gentleman called at four o'clock for the book. After reading some hours, I discovered the absence of my glasses, also the fact that I was seeing to read without trouble, and have not worn glasses from that day to the present time, as my eyesight has been normal.

Send a comment to the editors
NEXT IN THIS ISSUE
Testimony of Healing
I regard it as a great privilege to be able to testify to my... 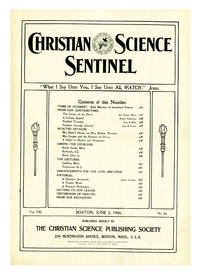