It is four years in January since we became interested in...

It is four years in January since we became interested in Christian Science, when we turned to it for healing. This was not an easy thing to do. Being a physician's daughter I had been taught to believe that nothing but medicine could heal sickness. Then I was devoted to an orthodox church. I joined the church at the age of twelve and became a teacher in the Sunday School at seventeen. I thought I was satisfied with the religion I professed, but what was I to do? I seemed to be facing death. For six years I had suffered terrible pain from an enlargement on the back of my neck, and for three years with appendicitis. After having been treated for years by the best physicians in the cities where we lived, we had consulted eminent specialists. We were told by two of them it was a tumor; another said he did not know and advised us to see the leading spinal specialist of this country. We did so and he called it tuberculosis of the spine, and said I would have to be in bed for about three months, strapped to the bed to let the spine heal. All agreed that the operation for appendicitis should not be delayed any longer. I had become very much discouraged, the pain was so intense that I was willing for anything, even an operation if I could only get a little relief from suffering.

Three weeks before the time set for the operation a Scientist asked my husband if he would not have me try Christian Science those intervening weeks. My husband knew I feared I would die in the operation and he was glad for anything that might postpone it. I was prejudiced against what I thought was Christian Science, and only tried it to please him. When I told the practitioner that I had no thought of giving up my church and was prejudiced against Christian Science, she kindly replied that people who were prejudiced had been healed, that Christian Scientists did no proselyting, and if I would remain she would be glad to treat me. I had never seen the book Science and Health, and I spent the half hour I was there reading the first page of the Preface.

Send a comment to the editors
NEXT IN THIS ISSUE
Testimony of Healing
For a good many years of my life I was a member of an... 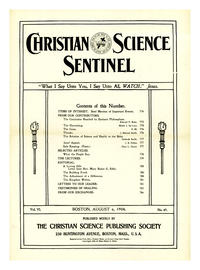