with contributions from C. B. Morris, Lansing B. Warner, J. W. Sproul

The Pavilion was not crowded last night [April 13], but it has never held a more interested audience than the three hundred people who listened to Edward A. Kimball of Chicago, a lecturer who would have magnificently entertained three thousand, had they cared to avail themselves of the treat that was in store for them. Such addresses and such speakers do not often come to San Bernardino or to the West.

Whether one agrees with him or not, the address by Mr. Kimball last night compelled attention. He has been a student of Mrs. Eddy herself; occupied most of the various positions in the gift of the cult; was for five years a teacher of Christian Science in the Massachusetts Metaphysical College, and is nothing, if not philosophical. 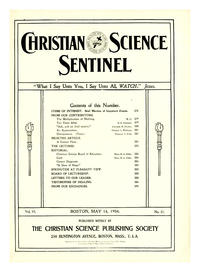