Upon careful examination, the question of the unreality of evil discovers itself to be a question of the perpetuity of evil. Is that which is opposed to good, eternal and indestructible, or will there ever come a time when it will cease to be? Christian dogma answers that the ultimate of man is a perfect state, called heaven, wherein is no sin, suffering, or death, and it declares that man reaches this condition by dying. Here Christian Science takes issue with popular theology and maintains, as do the Scriptures, that death is not the medium by which man attains sinlessness, but that death itself, with all other forms of evil, must be overcome, because "the last enemy that shall be destroyed" for each individual, some time and some how, is death. Then if death and the train of evils preceding it and leading up to it can be destroyed, are they real? Is anything real which is capable of destruction? It should be understood that the relative terms real and unreal, as employed by Christian Science to designate the spiritual and the material, are used just as Paul used the terms eternal and temporal.

The hope of a suffering, sin-laden race, reaches out for emancipation from evil, but if evil is real, then it is eternal, and all the efforts of the centuries to lift man above it have been of no avail, and all the efforts of centuries to come will be just as vain. It is because man cherishes the expectation, in spite of everything, that in some way he will be able to outgrow a consciousness of evil, that he labors on with a show of confidence in success.

Send a comment to the editors
NEXT IN THIS ISSUE
Article
It should also be remembered that in commissioning his... 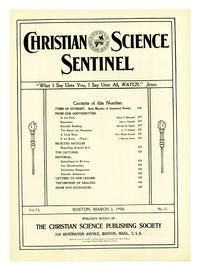