In Answer to a Clerical Critic

Mr. Kidd has said that Christian Science is a "substitute for Christianity and that it antagonizes science—is an enemy of philosophy, and a subverter of religion." Christian Science is not a "substitute" for Christianity, but it is Christianity, scientifically demonstrated. It antagonizes (as truth always does) all so-called science, philosophy, theology, and religion that is not of God. It not only claims to be a renewal of the teaching and practice of Christ, but it amply proves this, in the first place by the fact that it is based upon the teaching and demonstration of Christ and his apostles; and in the second place, it brings about the same physical, moral, mental, and spiritual results in the believer, as did the teaching and practices of Jesus and his early followers.

Even this critic seems to acknowledge this when he says, "Many of the advocates of Christian Science are very respectable people, who are sincere. They are an honor to the community, and usually they are a people who were formerly members of the church, who have now risen to a higher spiritual plane," etc. He assured his audience that he did not profess to possess any wisdom concerning Christian Science. But how can a man who is not a Christian Scientist and has never applied its Principle to the healing of a single case, and who acknowledges that he does not understand it himself, correctly interpret its Principle and practice? He cannot, for Jesus said: "If any man will do His [God's] will, he shall know of the doctrine, whether it be of God, or whether I speak of myself." The same will apply to Christian Science, for it is the truth about God. 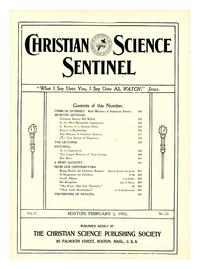