with contributions from J. Brierly

Rev. John White Chadwick says in The Christian Register, "It is the sensitive conscience of the man who is a bungling new-beginner in the art of wickedness that is a whip of scorpions. Could there be a more instructive paradox? Is it not convincing that we are not to look for the punishment of sin exclusively, or mainly, to the outward or the inward misery that it entails? Is it not convincing that the deadening down of conscience is so far from being escape from punishment that it is the worst punishment that can come upon a man,—to be dead in trespasses and sins. But this is slow to come, especially for those whose fall is from some conspicuous height of excellence; and, till it comes, through infinite degrees of moral lapse, what accusation and what punishment there is prepared for the men and women who do wrong! Surely, here is no 'survival' of hell, no sham, no painted flame, but the very thing itself, the persistent reality of hell. I see not what need there is for 'future punishment' for deeds done in the body, as if within the limits of this present life the resources of man's moral nature were not sufficient for the reward of every man according to his works. The punishment is oftentimes so great, so terrible, that it would seem out of all proportion to the wrong done, did we not know that by such punishment the erring soul is made to see 'how awful goodness is, and virtue in her shape how lovely, see and pine its loss.'

"To what do these considerations tend, if not to the persuasion that the most dreadful punishment of sin is not anything that comes upon us from without, but to fall short of the high calling of our possibility, to be so little when we might be so much?" 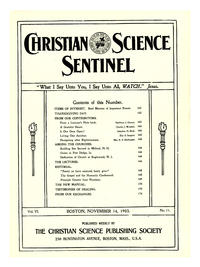