The average mortal is lazy when he comes to working out from the animal to the spiritual nature. His thought echoes Felix's when he said, "Go thy way for this time; when I have a convenient season, I will call for thee." The active mentality leads and does the work.

Isreal's children were at first God-governed. Each one talked with the Judge of the whole earth. After a few centuries we read, "And the Children of Isreal did evil in the sight of the Lord." They had turned from the Principle of Being. A personal sense had crept in between them and God, and they wanted a judge to rule over them and help them to shoulder the responsibility of decision. Justice was at first a simple matter. A decision at law was regarded by Moses as the result of "Inquiring of God." The judge was chosen according to his moral fitness, his ability to hear God's voice. This form of government existed for about four hundred and fifty years. 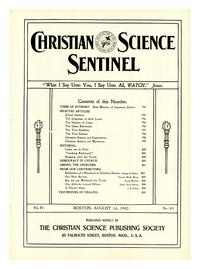