In Samuels' Opera House, Sunday afternoon [May 4], before a goodly audience which, aside from the member of First Church of Christ, Scientist, of Jamestown, under whose auspices the lecture was given, and those of the general public who were interested to attend, included numbers from Bradford, Warren, Corry, Salamanca, and other nearby towns, Carol Norton, C.S.D., of New York spoke on the subject: "Christian Science as Applied Christianity." He was introduced by Attorney Frank H. Mott of this city, who said:—

Ladies and Gentlemen:—At the Congress of Religions in Chicago in 1893, the design was, I think, that those of different faiths might come to a better understanding of the faith of each, that they might therefore be more sure of the reality of their own. That movement brought together representatives of all the great religious faiths throughout the world, that they might discuss rationally and intelligently the fundamentals of their beliefs. 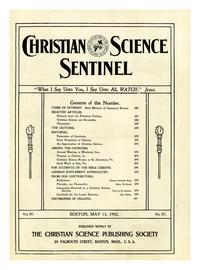