Facts in the Case

An Answer to Wm. A. Purrington's Attack on Christian Science.

To the Editor of the People and Patriot:—In your issue of April 3 appeared an attack upon Christian Science by William A. Purrington of New York City. Mr. Purrington accounts for the wonderful spread of Christian Science by saying that it is due to "false pretenses" to a divine power to heal disease. Christian Science has been before the enlightened American public for more than thirty years. Through its beneficent influence more than a million cures are recorded. During the year 1899 about one hundred new churches were organized, and during the past three months they have been organized at the rate of seven per month. In New York City more than half a million of dollars is being spent in building new churches. In Chicago three new churches are in process of construction, and throughout the denomination is to be found an err of church building. Is it reasonable or just to declare that in free or intelligent America such abundant harvests are' ripened from the soil of "false pretenses"? Rather may not these fruits come from the good which Christian Science contains, but which Mr. Purrington has overlooked.

In this attack Mr. Purrington describes this great Christian movement by such words as "gross ignorance." "vulgarity," "absurdity," and "irreverence." Because Christian Science has healed all classes of people, individuals from all classes have accepted it. Among these have been college professors, judges, physicians, business men, and clergymen. Concord is annually visited by hundreds, I might honestly say thousands, of Christian Scientists from all lands. It is acquainted with the honored leader of this progressive movement, and with many of our citizens who have been healed and who crowd Christian Science Hall at the Sunday and Wednesday evening services. In the presence of this sincere company would a fair-minded man apply the words vulgarity, absurdity, ignorance, and irreverence? 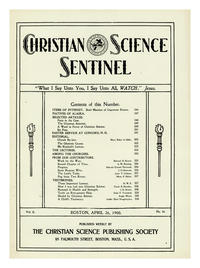