Goddard Chapel at Tufts College was thronged last evening (Wednesday, February 21) on the occasion of a public lecture given by Professor Amos E. Dolbear on wireless telegraphy. The lecture was illustrated by experiments showing the apparatus and method of sending messages without wires. In the course of his lecture Professor Dolbear said:—

It is necessary to make some distinction between the several known methods of electrically transmitting signals, which differ radically from each other. As long ago as 1835 or 1836 Professor Henry discovered what is now known as electrical induction between two parallel circuits which are separated from each other by a considerable distance, and he was able by sending a current through a coil of wire in his cellar to generate a current in antoher circuit in his attic, a distance of about thirty feet, there being no connecting wire between the two circuits. This same method has since been greatly extended by Sir William Preece, who has succeeded in this way in transmitting telegraphic signals between two circuits three of four miles apart. 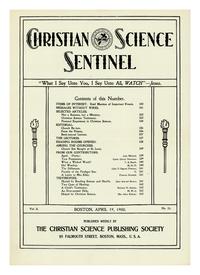